So, I had the opportunity to see an away Portland Timbers game on the East Coast.  It was so much fun! And the green people turnout was the the real deal. We were on a layover but other people flew in to see the game. Die. Hard. Fans.

Little did I know that the real fun would be on the plane the next day. We were lucky to fly the Portland Timbers soccer team home the day after their game. Wow, was it exciting. There were 30 something in the entourage and they were the last to board. The funniest thing any of them said to me was during boarding. I said Hi, are you a player and he said LOUD AND PROUD, “YES, ARE YOU?” with long, hard eye contact. I giggled uncomfortably and looked away. The rest of the team meandered on the plane and it was hard to tell who the players were and who the “support” people were. They were all decked out in their green Timbers gear but some were physical therapists, massage therapists, camera guy, equipment guy, spokesperson guy, communication guy. So many people involved in this Timbers operation. I had no idea. Right away, I found my people. I found them during boarding. I love real people that like to talk real life!

The support people were so interesting and the stories were non-stop. One guy told me about the head to toe in adidas gear (their sponsor) that the players wear down to their underwear. Wow, really? I didn’t know about adidas underwear?! Then he said, well almost everyone wears the adidas underwear but a few wear calvin klein underwear. Wait, what? Why? He showed me with his hands and drew a bikini line on top of his jeans. Some guys like the high, tight cut of the calvins he said with a straight face. Huh, interesting. Tell me more “interesting things.” Haha!

I asked where he was seated and said I’d be back with more questions after takeoff. He said, great I’d love to tell you everything! We got along just fine. 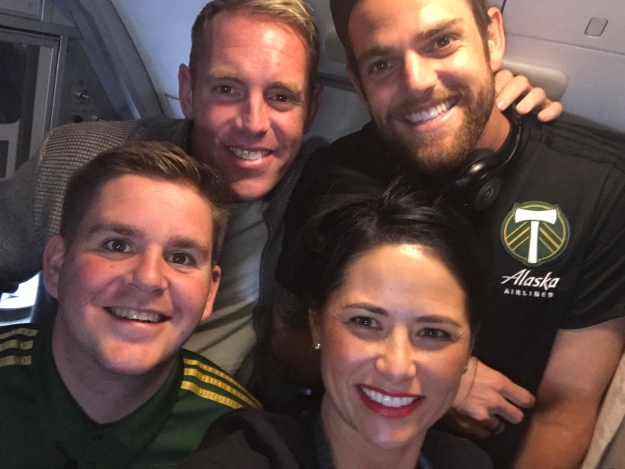 Group Selfie in the Airplane Galley

As we wiggled through the air from the East to the West, I got to chat with a few people. Some players and some support people. All of the people were awesome! So, who’s your favorite player? If you have to pick ONLY ONE player, who would it be. A few guys squirmed and bowed out of the conversation. But two main people told me in confidence, separately their favorite player. And the second guy asked me if the first guy picked the same player. No you guys didn’t pick the same favorite player. But I’ll never tell who picked who. He was surprised but dropped it. #truth

Fan favorite, Diego Valari. This was our “happy picture.”

This was our “serious” one.

As the flight came to a close, so did the stories. But boy was that a fun flight. And there were a lot of hugs on the way out. Yes, I’m a timbers fan and will be going to cheer on the boys this Spring.

I love the Portland Timbers and they are really good people. The ones you want to meet on an airplane. #justsayin