Yes, I’m a busy mama bear to three little cubs. But, the truth is I was waiting for a big, bright light to shine my way for my last day of my 30 day writing challenge. And it never happened. I expected there to be glorious fireworks or some epiphany at the end of my 30 day challenge. But it didn’t happen. So, I wrote my Standby post to buy some time and waited. Yes, I got busy visiting my parents this past weekend with my three little peanuts in tow. Yes, I’m on a 15 night stretch with my three little angels. Yes, my 7 year old got braces and an expander put in on Monday.

Sometimes the end isn’t shiny and cute. Sometimes there isn’t a big flashy bang at the end. Sometimes, it’s a soft whisper with low light. And the best part is the attitude you keep.

I’m glad I did a 30 day writing challenge. It was outside my comfort zone but very doable. It made me focus and dip into my creative side which can disappear when I get busy.

Hands down, my favorite part was connecting with all the people that I don’t normally get to connect with. We’re all busy and it’s hard to stay connected but writing everyday gave me that link.

So, thank you for your encouragement, messages, private messages, emails and texts! I loved getting to hear your story so much.

Here’s a few things I did that were inspired by my 30 day blogging challenge:

I upgraded my yoga membership to unlimited.

Kai and I learned how to tie a real tie because Kai likes to wear ties to school EVERYDAY.

Getting a view from the top.

Easter smiles while Kai smiles with his “flex.”

Reunited with my girl band and loving it! 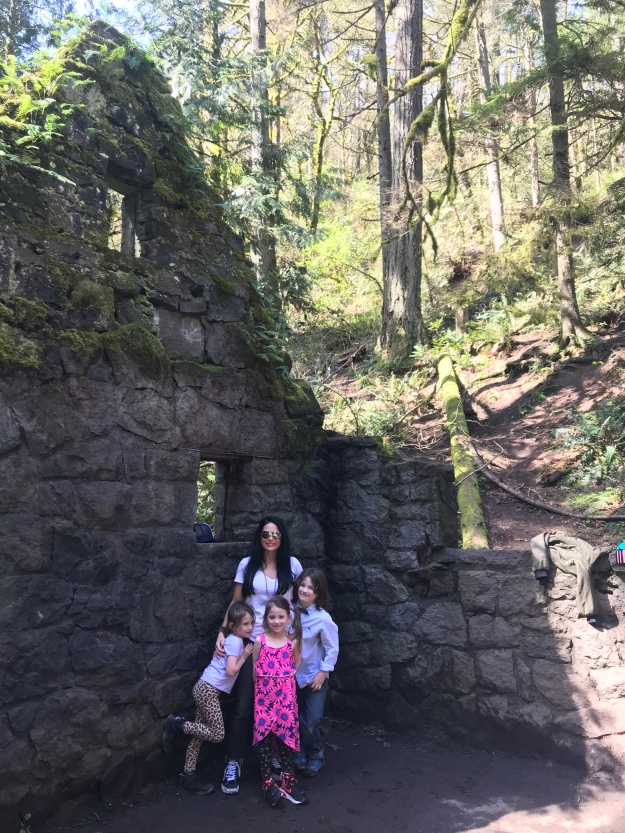 Surrounded by my barnacles. My mom calls them “barnies” or barnicles because my kids love to be ATTACHED TO MY BODY at all times. 😍

During my challenge, I would wonder why I’m doing this challenge at all or on the weekend, don’t I have enough stuff to do?! One or two days off would be so nice. Then I’d write, post it and the weekend would pass and I’d forget all about it.

Like many things in life hindsight feels different than when you’re in it with your sleeves pulled up handling it.

So, my friends my heart is full and my pocket is full of sunshine. Happy Day 30! Seems like yesterday I came up with this lil idea.

Here’s to handling life with grace, humor and lots of connection. 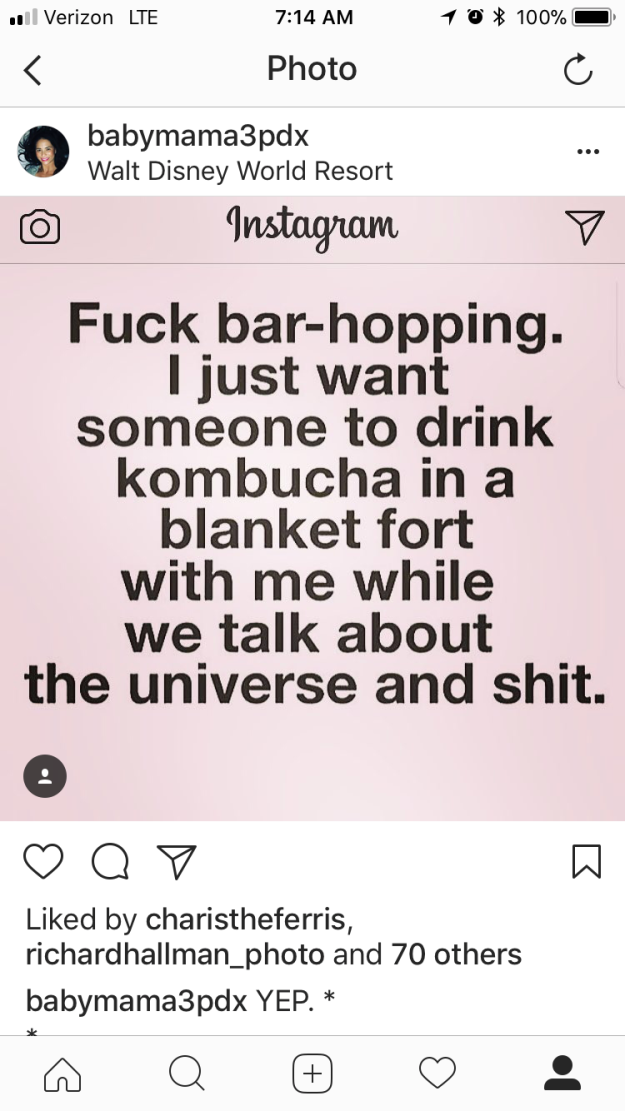 Soft and hard seems like the best of both worlds doesn’t it? It kinda does to me-strong but sweet. Smart but funny. Nice but adventurous. Passionate but reasonable. It’s a blend of opposites. 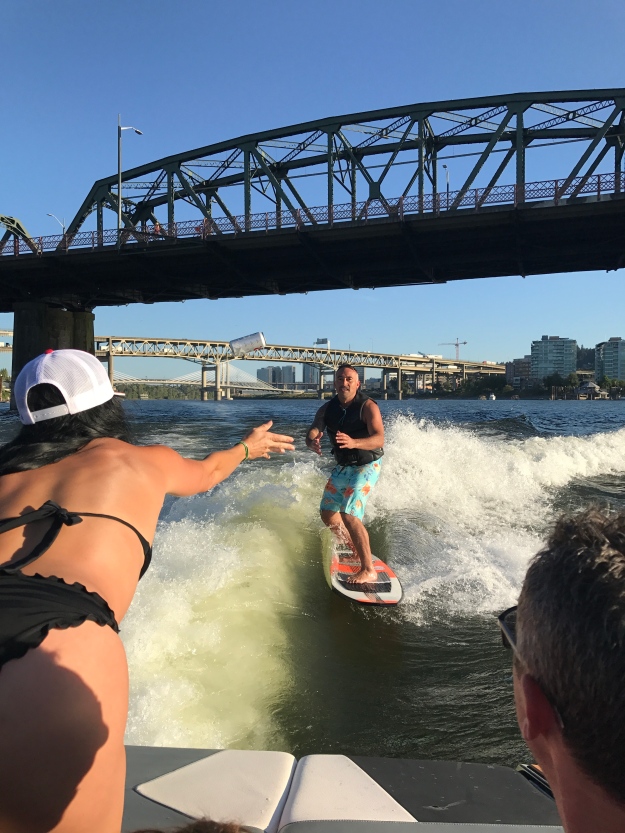 Throwing my buddy a cold drink last summer. It was a magic THROW if I do say so myself. 🙂 And yes he caught it.

I think the challenge is in the transition between the soft and hard. It’s the moments between the soft and hard. It’s the grey area, the new stuff or the things that don’t have a “title” yet. That’s where the magic happens. It’s the space in between, the transition part. Holding that space and breathing through it is the key. Not avoiding it. Not getting on amazon to ignore it. Not even hitting the gym to distract it. But literally, watching it like a wave come and go. One of my favorite authors, Eckart Tolle calls it living in the present moment.

I tell my three little kids that one of the secrets to life is learning how calm yourself down naturally and fairly quickly. With a 7 year old little boy and 5 year old identical girl twins, we get to practice this a lot. 🙂

**Life is tossing me a lot of the magic these days and I’m grabbing it by the face.

Sending love and resilience to you and your people.

Longboard surfing with my mom!

It’s amazing how much fun you can have in 24hours when you focus on “the fun.” I think short term travel vs. long term travel are two different animals. I’ve done both and like both. However, as a mom I don’t want to be away from my bebes for too long. So, I squeeze in the fun whenever I can. So much fun to be had on a layover!

I love my layovers, especially my Maui layovers. I was so lucky this past weekend with this little guy. He came right up to me, popped his head out of the water and it was love at first sight. 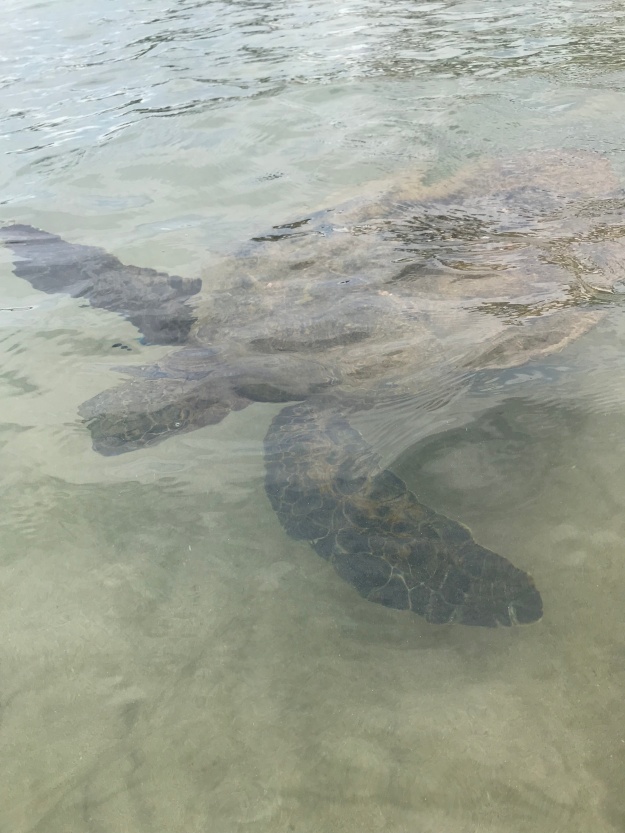 Wow this was the best turtle encounter I’ve ever had in Maui.

Maui, I love you!

Seeking more adventures, life balance and lots of laughs next year! Only 16 days left in 2017 and I couldn’t be more excited. 2017 rocked my world in so many ways. I’m ready to say farewell, goodbye and hello to the new year. 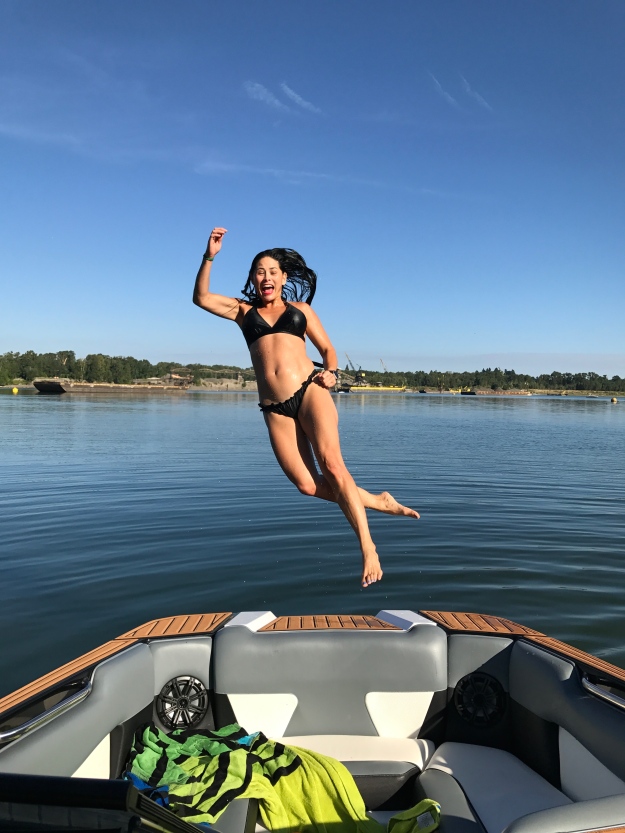 As I reflect on the past year, I shake my head. It’s like the saying goes, 2 steps forward and one step back. Or 2 steps forward and 4 steps back in my world. One big change for me is that I’m focusing on what I want, instead of what I don’t want. I used to reiterate what I don’t want because I thought that list was easier to swallow. When the noise rises, so does my self care. A friend was surprised that I did anything other than yoga. Wait, what, you go to the gym too?! Haha! Yeah, you could say that. Running, spinning and gym time is way easier for me than the yoga. However, the yoga is my best effort toward self love and self care. It’s what I need but not usually what I want. #justsayin

I’m ramping up the self care and gettin’ after the good stuff. Focusing on the fun, the travel and the mom life (the best life) this next trip around the sun.

So, I dragged my tired, puffy self to burncycle this morning. I haven’t been for over 10months and it left a mark. I will be walking funny for days… But, I’m looking for a new outcome 2018 so gotta put my money where my mouth is. There is no butt kicking quite like a cycle class. And, I LOVED it! 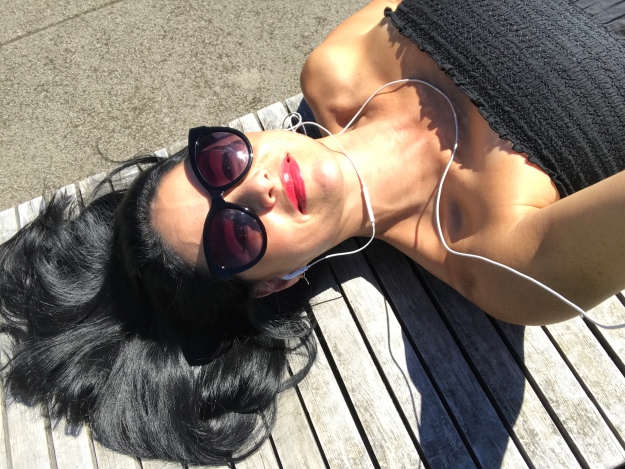 dSo….Where do I start? Whenever I read a magazine I start from the back. That must say something about me kind of like astrology. The people that read magazines from the back? Anyway, I first learned about Tinder from my sister at Edgefield. It was the summer of 2014 and I was seeing one of my girl crushes-Sarah McLachlan (thanks mom!). We were sitting outside on a beautiful summer night and my sister started “swiping” on her tinder I was horrified and interested at the same time. Haha! Most everyone has seen it by now but a big red NOPE pops across the page if you swipe left on someone’s picture. They don’t know you “noped” them though. If you swipe right, then a green LIKE pops up across the page. If that person you liked already liked you, then it’s a match! And you can text away via the tinder app. It’s long and arduous at best. At worst it’s crickets while you both wait for the other person to text first. If you like that person and it’s not immediately a match either they haven’t seen you yet or they didn’t like you. You just don’t’ know and really don’t care. The choices are overwhelming. Seems like everyone is on there. But not gunna lie, there’s SO MUCH WEIRD on there! I used to compare online dating to shopping at Ross. You have to go through so much sh*t to find one decent top. And usually I walk out of there exhausted and empty handed.

This is how it feels for a girl when you start online dating. So MANY choices coming at you hard!  (just trying not to lose my hat) Haha! Most of the choices aren’t great but you take a second look and do the “weeelllllll, maybe?!” #truth

The best part about tinder for me is that no one can message you unless you both like each other! Back in the day when I did match. com and ok cupid, I would get inundated with messages from people that didn’t fit my criteria at all. I would get long, personal emails from people living in Florida. Long, life stories if you will and I’d get sucked into their random story before I noticed that they lived in Florida or worse they were still married. Wait, what?! Sometimes, I think boobs are the only prerequisite for a lot of guys. Sad, but true. Sure, the attention might feel flattering for a hot minute and then it gets creepy and overwhelming very fast. So, that’s why I prefer “the tinder” as I like to call it.

The second best thing about tinder for me is that you don’t have to be out at the bars to meet other single people. Or at least sort of single people. There are so many “open relationships” these days in Portland. It almost seems like tattoo sleeves, cool and really common. I’m old school and think that one guy and one girl is plenty for me. Of course, I would love to meet someone at yoga or Trader Joes but I’m not holding my breath.

So, like the rest of the single people I suck it up, swallow my pride and make my tinder profile. At least I use my “real name.” #justsayin

The last thing I like about tinder is that its not a huge time suck. You can look a little or a lot and feel like you’re “dating” or at least putting yourself out there.

Sooooo. Back to the tinder tales. My first tinder date a couple years ago was a high school chemistry teacher. We had a lot of mutual friends on facebook so it seemed pretty safe. It’s always tough to be the first one and especially after a divorce. I know that I run from anyone newly divorced as I don’t want to be their “first date.”

We saw each other probably 8 times over 2 months.  We always met up at restaurants so don’t think I ever rode in his car? Looking back, I definitely kept him at arm’s length. Again, being the first one sucks. Haha! He was pretty uptight now that I think back about him. He was in his 40’s, never married and no kids. One time I wanted to sit outside at a restaurant and it was nice but the patio chairs were wet. I offered for him to sit on my jacket and he accepted it. Haha! Oh dear! I made a quick joke about being a mom and can deal with a wet seat. Not sure why those uptight ones like me but they usually do. And I’m NOT talking about the kids’ dad-no one is talking about him just to be clear.

When I first met the chemistry teacher, he met his last girlfriend on tinder and she was from Medford.  Long distance was the demise of their relationship-she had kids so wasn’t moving and he loved his job in Portland. One Sunday afternoon, I was out for a trail run. He had told me that he was going on a hike with his friend “John.” Anyway, the last time I saw him he was on that hike with his friend “John” but “John” had boobs and “Medford hair.” His eyes were as big as saucers as I ran by him and his Medford girlfriend holding hands. I’m not sure who was more surprised me or him?